CN2000 is a non-toxic, cementitious capillary crystalline waterproofing system with a patented eka-molecular sieve structure originally developed for the Atomic Nuclear Industry and National Defense of China by the High Tech Industry Park ZHONGE Waterproof Company Ltd. CN2000 is used as a surface coating to protect infrastructure from deterioration. Specifically, CN2000 will protect infrastructure from rapid freeze and thaw cycles, water, chloride ion and other contaminants. Because CN2000 is anti-corrosive, it will protect the reinforcing steel against corrosion and ultimate deterioration of the concrete.

CN2000 is comprised of 4 high performance and superior tested products that create an impervious watertight coating system by becoming an integral part of the concrete substrate, which can be applied from the positive or negative side of a concrete structure. The waterproof layers maintain ventilation of the concrete, are impermeable to water, and have high impervious pressure. Traditional systems may treat the surface of the concrete, whereas CN2000® crystalline waterproofing provides a solution that will last for decades.

In the presence of water, CN2000 reacts to produce insoluble C-S-H crystals that permanently block the capillaries and hairline cracks naturally existing in the concrete. Our proprietary active ingredients defuse into the concrete matrix indefinitely. CN2000® can be used internally or externally in places where rapid and early strength gain is required, such as plugging / stopping active water leaks and sealing of leaking joints, tie holes and cracks.

Zhonghe is a leading expert in the field because they specifically engage in the development and production of waterproof materials. Through digitally controlled production, Zhonghe ensures consistency and quality by producing their own manufacturing equipment with a capacity of thousands of tons per year. Zhonghe holds one international patent, two national invention patents and national utility model, for a total of seven patents. Zhonghe passed ISO – 9001-2008 GB/T 19001-2000 authentication system of quality control.

Around the world, from subway stations to swimming pools; from bridge structures to every kind of foundation; from power stations to water treatment plants, and much more, the list of applications for CN2000® continues to grow because CN2000 can meet the toughest challenges.

CN2000® is applicable to the following engineering and/or architectural projects in preventing leaks and corrosion at the surface of facing water and the surface of backing water such as:

Power generation facilities that are subject to elemental conditions

Facilities subject to, or near water or underground operations

Kelso Coatings’ growing list of diverse projects and over a decade of successful applications has proven the CN2000 system to be the market leader in making concrete structures watertight.

Cost effective and easy to use 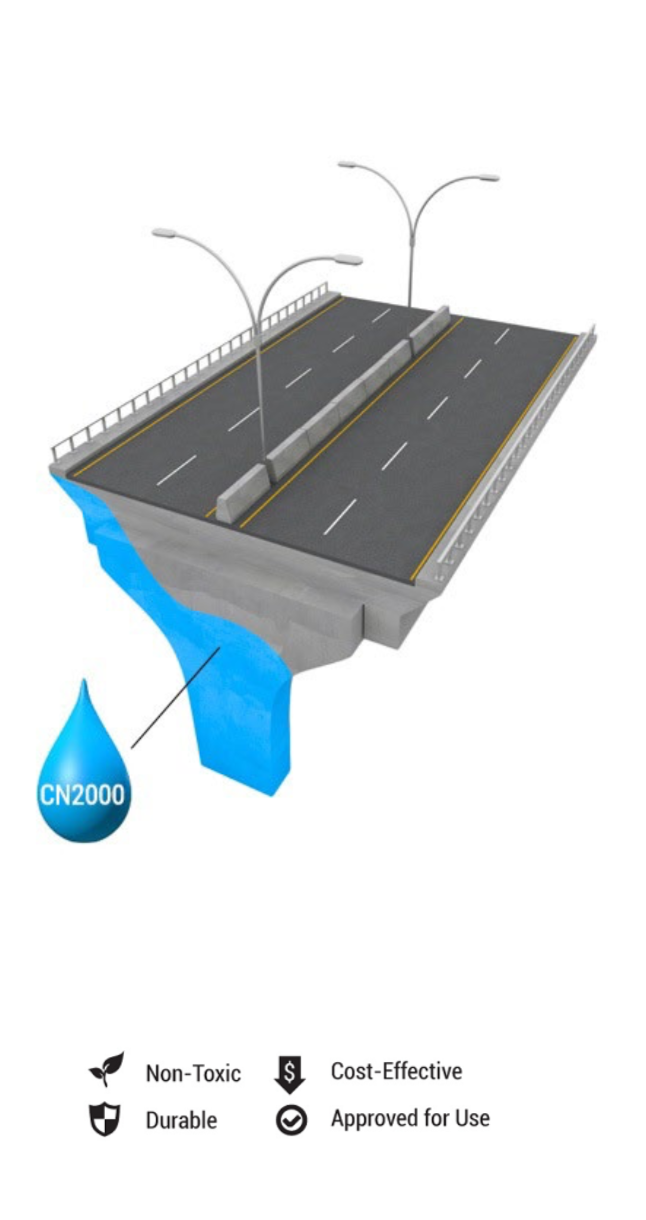 In the presence of water, the natural components of cement (silicate, aluminates, and dissociated calcium oxide) trigger a chemical reaction under the catalyst of the proprietary active substances of CN2000B®, producing insoluble crystalline along the voids, blocking the passage of water and other harmful corrosives. CN2000® creates an impenetrable barrier to water and other liquids while still allowing the concrete to breathe. The active proprietary materials in CN2000B® will remain dormant within the concrete until moisture attempts to re-enter. The moisture will once again activate the proprietary materials to produce more crystals, blocking the passage of water. The active materials will continue to penetrate and protect the concrete for its natural lifespan. CN2000® cures in 24 hours allowing for the next operation to begin.

In the process of developing CN2000®, a study of molecular physics, the intermolecular force and the movement rule of molecules, introduced the concept of the “eka-molecular sieve” to the capillary crystalline process. The main body of the waterproof material has been designed to have the structure of the eka-molecular sieve. The waterproof layer has a high impervious strength and still has the ability to breath. Thus the desired effect of ventilation and waterproofing is achieved.
The activating substance of CN2000® is made from unsaturated polar molecules and is an ultra-fine (nm) powder. It will attach on the surface of the cement stones by the action of another important special auxiliary material, a sort of eka-molecular sieve. The latter has many pores with a certain uniform size with a very high specific surface area. Its characteristics are:

CN2000® contains cement and quartz sand which acts as a dispersing agent enabling uniform distribution among them. 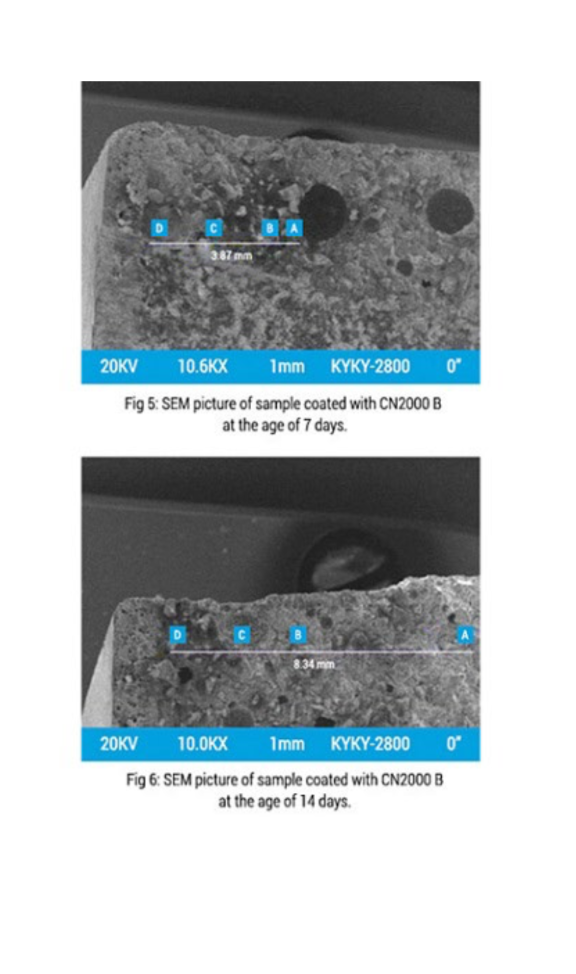 Engineers describe the importance of the durability design of concrete structures utilizing “the five-times law.” If one dollar is saved from the cost which should be applied for the protection of reinforced concrete in design then, when steel bars are found to be corroded, the repair measure needs the additional cost of $5.00. When the surface of the concrete shows cracks along the bar, the required repair needs $25.00. After serious decay and damage to structures are discovered, the required repair or replacement measure needs $125.00.

Now let’s take the salt harm to the bridge as an example of the impact on the structure’s life cycle.

Average cost savings using CN2000® as a protective coating, over the 60 year lifespan of a bridge structure.

The above tables illustrate that under salt prevalent environmental conditions, should the surface of the concrete structure not have any protective measure applied, necessary repairs will be required in less than twelve years.

Although the initial repair costs are minimal, over a period of 60 years this structure will have been repaired six times and the total accumulated costs will have totaled over six times the original costs that were invested to build the structure (statistical figures for American bridges is four times).

When a structure is coated with CN2000B® as a protective shield, even if the structure requires repairs every ten years, the total accumulated costs will only equal one quarter of the original investment for a structure without a waterproofing installation. A CN2000® application results in maintenance savings of more than 70% compared to no coating at all. This does not take into consideration the added structural longevity that can be achieved with the application of CN2000B®. 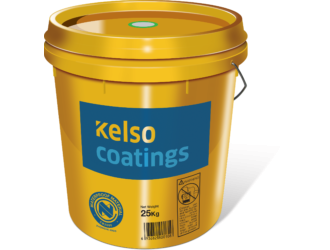 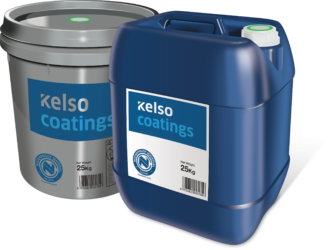 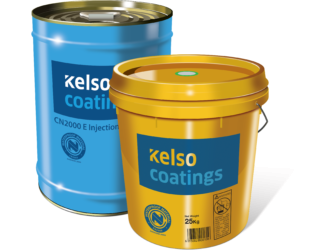 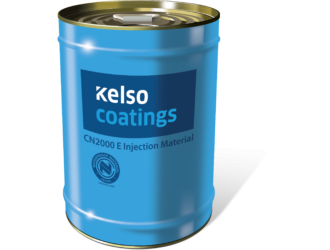